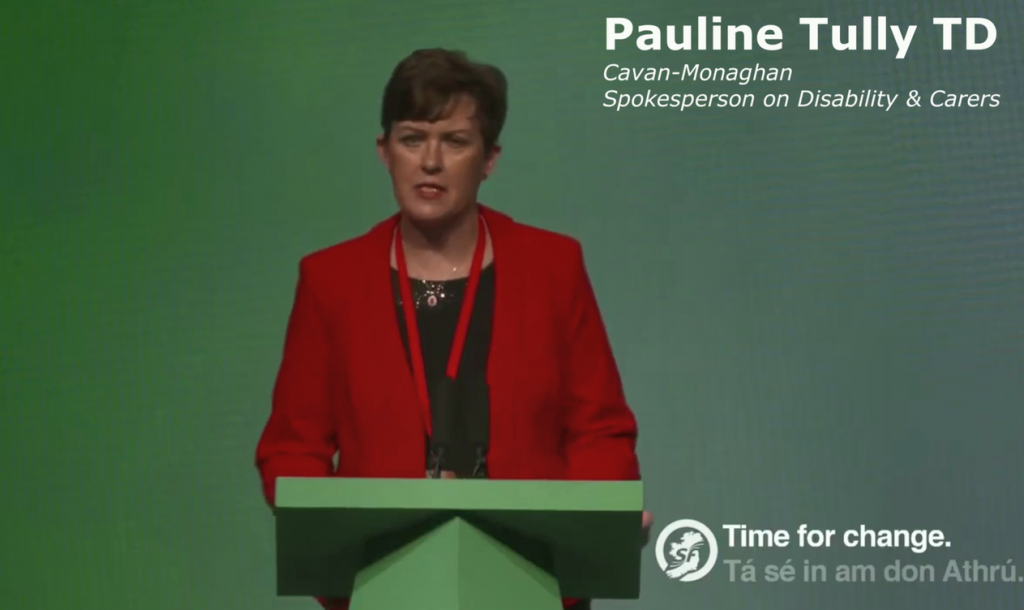 At the Sinn Féin Ard Fheis on Saturday Pauline Tully TD, Sinn Féin spokesperson on Disability and Carers, called on the government to fully implement the United Nations Convention on the Rights of People with Disabilities and ratify the Optional Protocol.

The Sinn Féin TD for Cavan-Monaghan was speaking in support of a number of motions before the Ard Fheis on delivering rights for people with disabilities and carers. 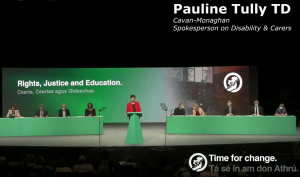 In her speech, Teachta Tully said:

“I call on the government to fully implement the UNCRPD immediately and to ratify the optional protocol without delay, so that disabled people can challenge the government when their rights are not being met.

“The government need to take the implementation  of the UNCRPD seriously and invest properly in supports which would enable people with disabilities to live an independent life.

“To be able to choose where to live and who to live with.

“To give access to educational and training opportunities and provide supports to ensure that people with disabilities can enter employment and in particular to stop discriminating against disabled people who want to set up their own business.

“There must be recognition that disabled people need additional support to allow this to happen.

“Living in the community is not just about accessible housing it is about access to affordable transport, access to education and employment, to be able to live life to the full and not be subject to some imposed timetable within an institution.

“Sinn Féin’s Alternative Budget included measures such as additional Personal Assistance hours as well as other supports to enable independent living. There was also a commitment to much faster decongregation and to move young people out of nursing homes where so many have been inappropriately placed.

“I want to salute carers for their commitment to their jobs and again call on the government to properly recognise the contribution of carers to the economy where billions of Euros are saved every year by their selfless work and to recognise this by increasing the carers support grant and other supports such as respite and relax the means-test for the carers allowance.

“A monumental change in attitude and culture is required and we need to move away from the medical model to the social model of care immediately.

“So, whether it’s an assessment of need, interventions or independent living supports, all must be seamless and without individuals having to fight for everything or having to wait years for a service.

Finally, I would like to thank the Sinn Féin Working Group on Disability for all the support they have given me.

Nothing about us without us!