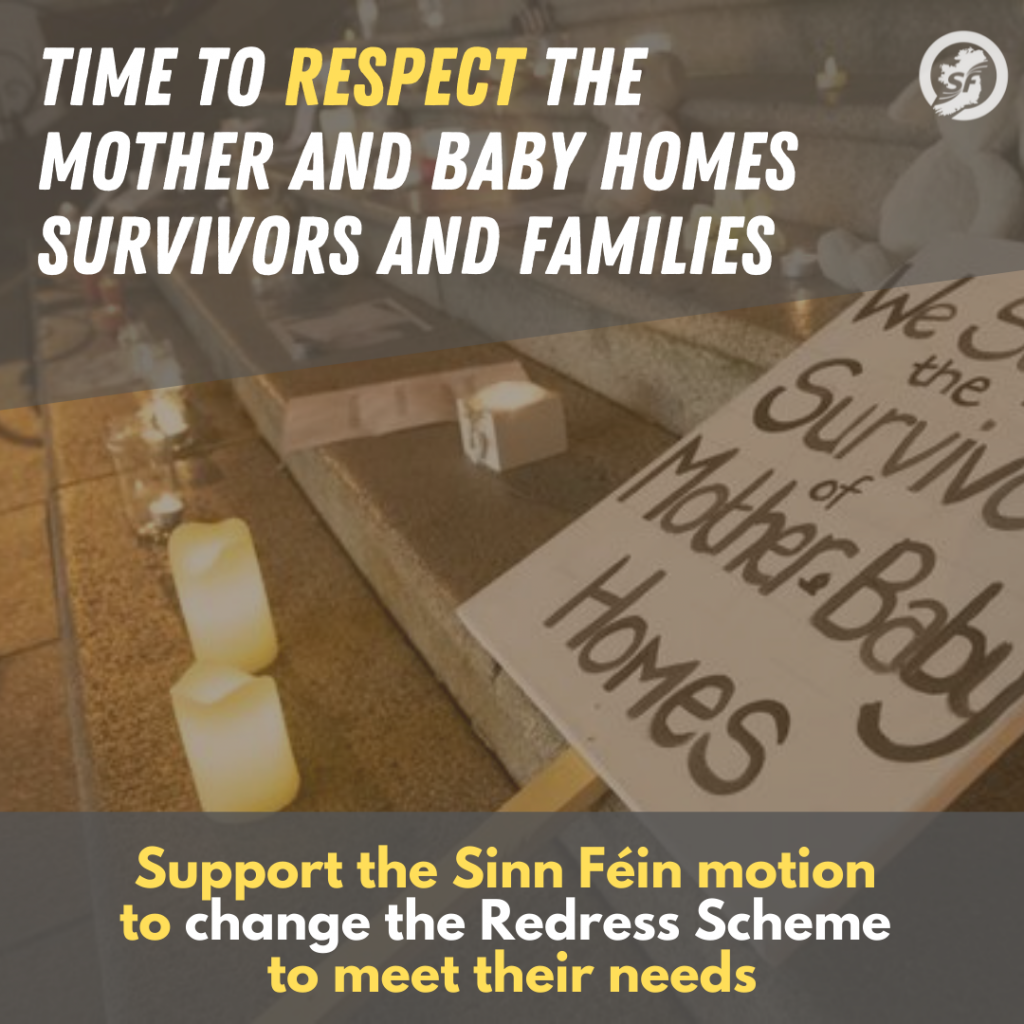 Sinn Féin TD for Cavan-Monaghan Pauline Tully has called on all TDs to back a cross-party motion the party is bringing to the Dáil which would ensure the Mother and Baby Homes redress scheme meets the needs of survivors.

The motion will be debated in the Dáil on Tuesday and would ensure that the needs of survivors are respected in the government’s redress scheme.

This would include urgently reviewing issues survivors have identified within the scheme such as time-based criteria, the exclusion of children who were boarded out, access to the enhanced Medical Card and the failure to include some institutions.

The motion also calls on the Government to immediately seek recourse from religious orders and pharmaceutical companies to contribute to the redress scheme.

It has cross-party support among the opposition.

“Sinn Féin are bringing a cross-party motion before the Dáil that would ensure the redress scheme is changed to meet the needs of Mother and Baby Home survivors.

“It’s time to respect Mother and Baby Homes survivors and their families.

“We are bringing this motion to stand up for survivors and ensure that their needs are respected. Survivors bravely came forward and told their stories, because they wanted to see justice. However, many have been left feeling deeply frustrated and let down by the appalling way in which the redress scheme has been designed.

“The scheme is an insult to survivors and totally fails to take into account their needs. This isn’t good enough. This government has failed survivors time and time again. This has to stop.

“This motion stands with survivors and calls on the government to change the redress scheme to be fairer to them. The motion has cross-party support among the opposition.

“The motion would ensure the government must urgently review the scheme’s time-based criteria, exclusion of children who were boarded out, access to the enhanced Medical Card, proposed payment rates and end the unfair exclusion of some survivors and institutions.

“It also calls on the Government to seek immediate and substantive recourse from religious orders and pharmaceutical companies to contribute to the redress scheme.

“I am calling on all TDs here in Cavan-Monaghan and across the Dáil to back this cross-party motion and do right by survivors. This is the very least that survivors deserve. The government has treated them with complete contempt time and time again and it is long overdue that they be respected and that their needs are met.

“It is vital that the government engages with survivors, not just as a box ticking exercise but to genuinely listen to them and then act urgently to meet their needs.

“The government must do the right thing here and back this important motion when it comes before the Dáil on Tuesday. It is time to respect survivors and their families.”