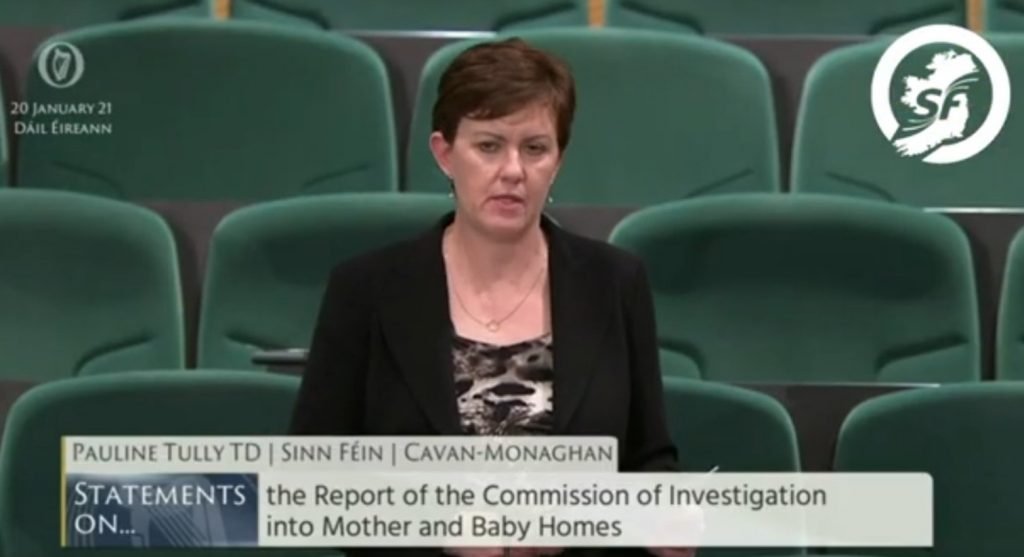 Sinn Féin TD Pauline Tully believes the Governments proposed Birth Information and Tracing Legislation published today, is totally at odds with the express wishes of adoptees and mothers many of whom live here in Cavan-Monaghan.

“I am completely dismayed the Minister, once again has not listened to adoptees, mothers or their advocates.

“What I find most disappointing is the deliberate ploy by Government to spin today’s announcement as a win for adoptees and mothers in Cavan-Monaghan, but the reality is this is no win. The reality is they have not been listened too.

“Today should have marked an historic moment for adoptees in the long and exhausting journey they have travelled, in gaining full and unfettered access to their records and birth information – but again they have been met with another government bill that will not deliver.

“I am particularly disappointed around the requirement for mandatory information sessions, on initial glance it seems that this provision has been removed. But on further inspection it appears the only thing that has changed is the mechanism by which this ‘meeting’ takes place. Bearing in mind that no other Irish citizen making a similar application would be obliged to go through this process.

“I am extremely concerned red line issues for adoptees, which the Minister and Government are very aware off, such as unrestricted access to birth certificates and information have not been provided for.

“I cannot comprehend how key recommendations from the Joint Oireachtas Committee on Children’s report, have not factored at all in the redrafting of this legislation.

“The extensive work undertaken by the committee, the hours and hours of testimony from adoptees, mothers, survivors and their advocates; the significant and all-encompassing report and comprehensive consultation all appears to have been in vain, and I believe makes a mockery of the committee and its work.

“It is clear from what the Minister has announced today, that this fight is just beginning. I know that Sinn Féin’s Spokesperson on Children Kathleen Funchion who has been outstanding in advocating on behalf of adoptees, mothers and survivors will not be found wanting. She is committed to ensuring that all adoptees and mothers are included, listened too and their wishes acted on.

“The bill will now come before the same Oireachtas Children’s Committee, and it goes without saying that the devil will be in the detail and it will take time to dig down into this bill. I would like to take this opportunity to assure adoptees, mothers and their advocates living in Cavan-Monaghan that I and my colleagues in Sinn Féin will work to ensure this legislation upholds their human rights.

“Finally, I’d like to commend all adoptees, mothers, survivors, their families and advocates in Cavan-Monaghan for their unending and relentless pursuit of justice. It is a little over 20 years since the first piece of legislation was introduced to allow access to one’s adoptive and birth information files. It is timely that we remember the Government at the times started this journey seeking to criminalise adoptees for seeking their information.

“Their journey and fight continue.”